Poker machines not wanted in our suburbs and towns – The Mercury, March 2016 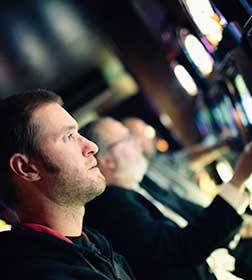 I’VE never been given the chance to have a say about what gambling looks like in this state. The one and only time Tasmanians did have that chance, I wasn’t born yet. That one time was December, 1968, and I’d say that makes another well overdue.

Treasurer Peter Gutwein spoke last week about righting wrongs of the past. He pledged open, transparent consultation on gambling policy decisions. Sadly, the process he revealed neglects to ask Tasmanians whether they want poker machines in their suburbs and towns.

In 1968 Tasmanians were asked one question in a referendum — whether a casino licence should be granted to Federal Hotels to operate Wrest Point casino in Sandy Bay. The casino was billed as being for high-roller tourists and poker machines would not be allowed.

The referendum was passed with a 53 per cent “yes” to 47 per cent “no” vote. The yes case was most strongly supported in electorates of Franklin and Denison, with Braddon and Wilmot (now Lyons) virtually 50/50 in their result. The electorate of Bass was the only one in which “no” case prevailed. However, the people of Bass were not asked for their views again nine years later when the state’s second casino was located in their electorate.

Despite the promise of no poker machines, by 1986 the casinos had introduced them. You might not remember being asked your views on that. The people of Tasmania were not consulted. Within 20 years of their introduction, poker machines were responsible for about 90 per cent of the casinos’ gambling revenue, which is still the case today.

In 1997 the drift of poker machines from casinos to our suburbs and towns began. Again, the Tasmanian people were not consulted about this significant change. It was an incredibly lucrative decision for those with financial interests in these addictive machines, but for the community it was disastrous. It was a change that should never have occurred without the participation of the Tasmanian people.

So what do Tasmanians think of poker machines?

The Government’s research showed that in 1996 less than one in five Tasmanians thought they were of benefit the community. In 2001, four years after their introduction to pubs and clubs, four in five thought we had not benefited from having them in local venues. In 2008, only 10 per cent of Tasmanians thought the state had benefited from poker machines in local suburbs and towns, with 80 per cent regarding gambling as too accessible and close to 90 per cent viewing the machines as a serious social problem.

Anglicare Tasmania has done regular polling on this. Our results align closely with the Government’s and show Tasmanians have a definite, clear view of the detrimental effect of poker machines on their friends, families and neighbours.

Using an independent polling group, Anglicare sought community views in 2003 and 2015. In both years, 84 per cent of Tasmanians thought the community had not benefited from having poker machines in pubs and clubs. In both, a third of Tasmanians indicated they knew someone who had experienced serious problems gambling on poker machines.

Let’s just let that sink in for a moment. One in three of us know someone who has a serious problem with gambling on poker machines — that’s a lot of skin in the game.

It is no wonder that when polling was done in November, one in two Tasmanians wanted poker machines completely removed from pubs and clubs, and a further third on top of that wanted numbers reduced.

One in three of us know someone who has a serious problem with gambling on poker machines — that’s a lot of skin in the game.

It’s not too late for this process to be set straight and for the right question to be asked — do Tasmanians want poker machines in their local suburbs and towns?

Let’s get an answer to that question and a commitment from the Government to be directed by the result.

The answer to that question should set the path for consultation on the finer policy details. Only then will we know that, for the first time in nearly 50 years, Tasmanians are steering the direction on gambling in this state.

Meg Webb is manager of the Social Action and Research Centre at Anglicare Tasmania.