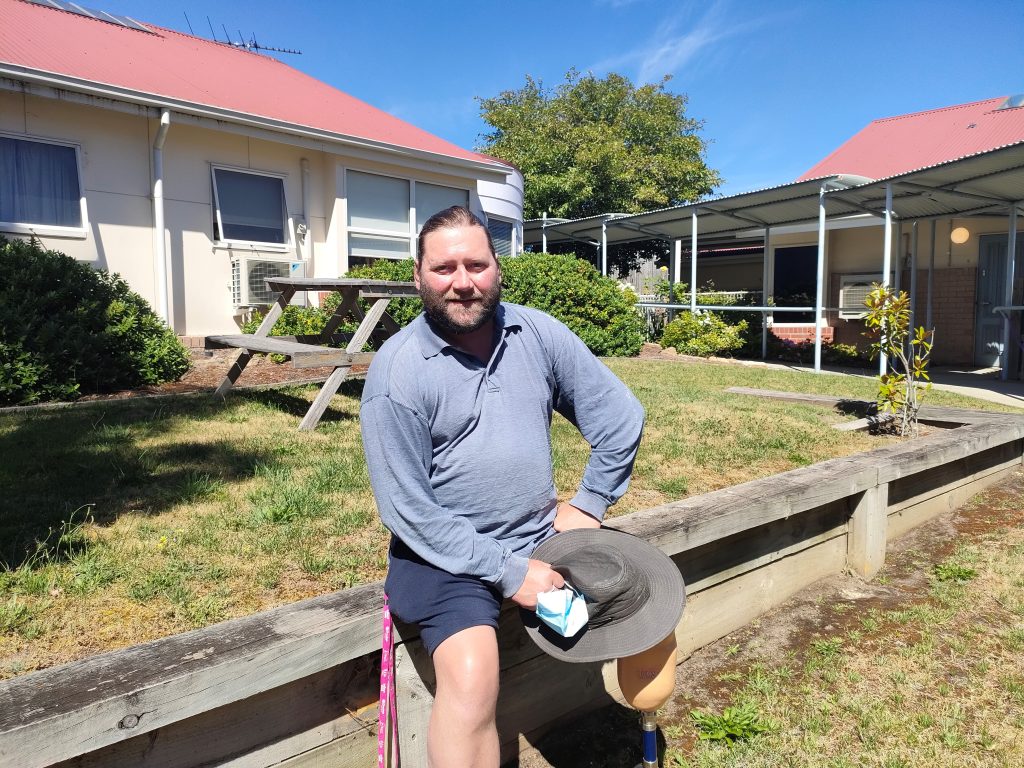 Have you seen Tasmania’s new road safety campaign, Over is Over?

It includes a powerful television advertisement that features Tasmanians of all ages and walks of life, including emergency service personnel, talking about to the importance of driving within the speed limit.

It’s a message that resonates with Anglicare. On behalf of the Motor Accidents Insurance Board, we manage three residential facilities for people who have acquired a brain injury as a result of a vehicle accident. In the last five years in Tasmania, more than 370 deaths and serious injuries were speeding-related.

The road safety advertisement has a powerful message. It also provided a local job opportunity for David, who lives at Bilton Lodge in Claremont. Bilton Lodge is managed by Anglicare to provide safe, affordable housing for people on low incomes.

David impressed the director at his audition and was quickly given a part. He appears in the first seconds of the advertisement.

David’s life experience includes a decade as a competition-winning sand sculptor at Bondi Beach and at the Mindil Beach Sunset Markets in Darwin. He signed up with talent agency Tas Casting after a conversation with his support worker about film and theatre and the importance of keeping in touch with his creative side.

“I like cinematography and I really enjoyed the experience of making the ad,” David says. “We filmed it at night over a few hours in an electric car and there was a full crew, a safety guy, makeup, lighting, sound and food.  I was told I was ‘Russell Crow-esque’, whatever that means!”

He says he has other irons in the fire if his acting career doesn’t take off. He’s just finished a 120-hour course in aged and disability care and is about to have his job-readiness assessment. He says he thinks disability support work may suit him best.  “I am a compassionate person and I can talk to anyone. I have a lifetime of dealing with acquired injuries, including losing my leg 12 months ago.”

Move to Bilton key to recovery

David spent five months living at the Repatriation Hospital following his surgery. While the care he received there was ‘absolutely gold standard’, the move to Bilton Lodge was a huge leap forward in his recovery.

“I’m very happy here. It’s quiet and the grounds are beautiful,” David explains. “It’s a very inclusive environment. People often keep to themselves but we can also come together for organised activities, such as fishing and helping Huon Aquaculture to clean up rubbish along the shoreline. We also have inter-Lodge eight ball competitions and variety shows. I’m always up for singing a song and telling a joke. The staff here are kind and supportive, the rooms are modern and the meals are pretty healthy.”

He’s also come up with an idea for a pirate-themed, anti-bullying program for children (“I have one leg AND I can speak pirate”, he says) and wouldn’t mind trying his hand at stand-up comedy. He is set to receive a new prosthetic leg in the coming weeks and is hopeful it will improve his mobility and enable him to add the gym, walking and riding to his fitness regime.

Anglicare manages supported accommodation in the South, North and North West for adults looking for safe and affordable housing, with onsite support.

Each resident is encouraged to set personal goals and to engage with their local community. Check this page on our website for specific information about this type of accommodation, and contact Housing Connect on 1800 800 588.