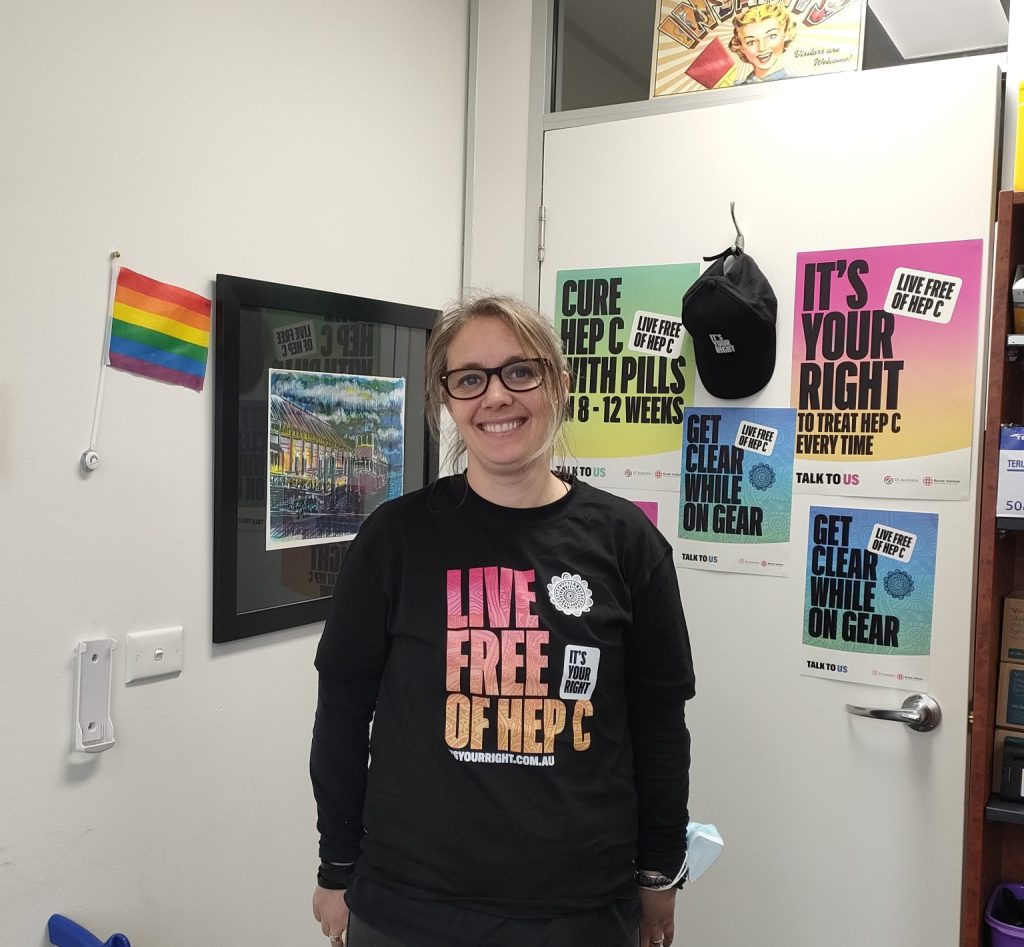 The Needle and Syringe Program outlets that Anglicare manages on behalf of the Tasmanian government are safe and welcoming spaces for people who inject drugs. The Anglicare team is leading a new trial that has the potential to reduce drug overdose and save lives.

The Needle and Syringe Program (NSP) is a free service supported by the Tasmanian Department of Health. It operates on the public health frontline, providing safe and sterile injecting equipment and non-judgemental, confidential support.

Jo Murphy, a Needle and Syringe Program Worker with Anglicare at Watchorn Street in Hobart, says there are clients who regularly drop in to collect the equipment they need to inject drugs safely.

“We have an average of eight people call into us each day,” she says. “Some people come in weekly. We have regular clients from south of Hobart including as far away as Bruny Island.”

Anglicare’s NSP outlets in other parts of the State have a similar reach: the Glenorchy NSP supports clients from the Midlands and Derwent Valley region, while the Burnie outlet is visited by people from the Circular Head and West Coast regions.

While overdose can occur with an illicit drug such as heroin, most overdoses are caused by opioid-based prescription medicines that depress the central nervous system, such as morphine, codeine, tramadol, buprenorphine and methadone. The risk of overdose increases if multiple central nervous system depressants are taken, including opioids, alcohol, or benzodiazepines.

The overdose reversal drug Naloxone has been available for free from Tasmania’s NSP outlets since July 2020, commencing with a successful Take-Home Naloxone (THN) trial that was supported by Anglicare.

Naloxone comes in a number of different formulations including Nyxoid, an easy-to-use nasal spray that is administered after an opioid overdose. Its effects last for 30 – 90 minutes, giving people time to seek urgent medical help.

Figures provided by the Tasmanian Department of Health indicate more than 800 kits have been distributed around the State at participating NSPs.

There have also been 76 instances where Naloxone has been used to reverse an overdose.

Jo encourages people to visit their closest NSP outlet to get new naloxone supplies and to make sure any naloxone they have at home hasn’t reach its expiry date.

A new harm reduction trial will commence next month

Anglicare has received a grant from the Tasmanian Department of Health to trial the distribution of free fentanyl testing strips at its NSPs.

Increasing evidence indicates it is now being used as an additive to illicit drugs that sit outside the opioid family, such as cocaine, MDMA and methamphetamines.

Jo said many people who use drugs are not aware of the composition of the substance they are taking – which can be deadly.

“We’ve had NSP clients who report feelings of lethargy and drowsiness after consuming methamphetamine. This was not their usual reaction. When people unknowingly ingest fentanyl they are at a higher risk of accidental overdose as they may have little or no tolerance to opioids,” she said.

Jo said that from January to May 2022 there had been a 30% increase in people coming into a local NSP to pick up injecting equipment to use for heroin. Fentanyl is commonly used as a cutting agent in heroin.

The testing strips can detect the presence of fentanyl in any drug batch of pills, powder or injectables. If the test shows fentanyl contamination the person can then make an informed decision on whether to go ahead or not. This may be life-saving.

The fentanyl testing strips will be available for free from Anglicare NSPs in Watchorn Street and Glenorchy in the South and Burnie in the North West from 1 September until supplies run out. NSP team members are available to provide support about any aspect of drug use, on request.

31 August is International Overdose Awareness Day. On this day we remember people who have died and acknowledge the grief of family and friends who are left behind. We marked the day with crane-folding activities and memorial displays.  For more information, visit the Alcohol, Tobacco and Other Drugs website.

Where can I get naloxone?

Naloxone kits are available at the following NSP outlets:

Check this article to find out more about how to detect signs of an overdose and what you should do.